Don’t even think about putting on make up or squatting. 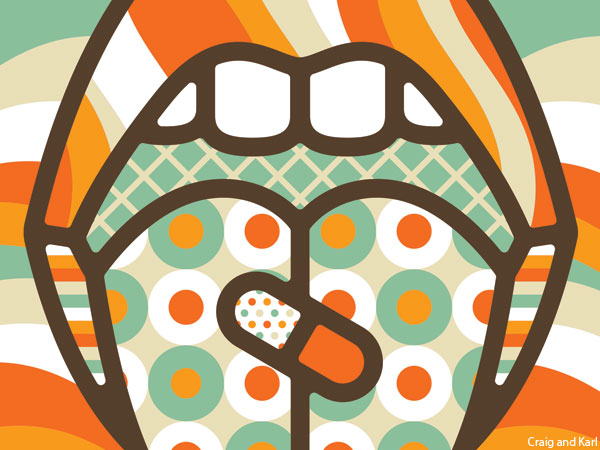 I’m not a novice to drug intake. I’ll say this quietly in case the feds are listening, but I’ve been under the influence a few times in my life, enjoying the proper dose of Molly, weed, alcohol, ecstasy, and accidentally, coke (trust me, it really was an accident). Besides the sprinkle of coke, that’s as far as I thought I would go. My drug and alcohol intake was always amongst friends and was mostly swallowed, sipped, or inhaled before going to a college party or concert. It was an occasional habit. I guess to put it simply, it was a way of feeding the experimental spirit inside of me. And although I had pretty much tried most of the soft core stuff, that spirit was itching for more, which is possibly how I agreed to taking my next drug: Adderall.

Or maybe it was the perpetual bad habit of procrastinating that led me to taking it. I was in the final quarter of my senior year and the only things holding me back were a finance exam and a final project for a magazine writing class. It’s safe to say that I could write the hell out of a paper better than I could figure out how a bunch of numbers to calculate the perpetuity. But even so, I needed to ace both of them to secure my grades.

Of course, I hadn’t even looked at the instructions for my final project. Remarkably, I had already been studying for my finance exam for the past couple of days, but since I failed the past two, I knew I needed some extra studying. Both subjects needed an equal amount of time and dedication, but I wasn’t exactly sure how I was going to do it.

For those of you who jumped right to the popping pills moment, think again. I actually decided that I was going to wake up at the crack of dawn and use the entire day to study as hard as I could. I started at 6am with a large coffee. I cracked open my finance book on the floor of my room and retaught myself a semester’s worth of material. After four hours went by, I switched over to my final project. I continued that back an forth, until around 4pm. my plan was to lock myself in my room and study all day, but I forgot to fit eating and napping into my schedule. There was no time to nap, I told myself. Unfortunately, my body was still programmed to get tired, but what if I could find something that would delay my fatigue and propel me further in my studying zone?

Now, it’s Adderall time. My friend and fellow procrastinator, also had a shit ton of work to do with no end in sight. Unlike me though, she hadn’t started at the crack of dawn. She woke up around noon and just knew that she was going to need a little something to help her get through the day. So after a slow start, she came in my room around 1pm and told me she was getting a little “study buddy”. She wanted to know if I wanted some too. Did I?

As I said, I was already pretty veteran in the drug department, but I didn’t know many people who took Adderall. I knew weed made you hungry and laugh hysterically. I knew the touch of surfaces on ecstasy good send anyone into paradise, and I knew Molly could have me bouncing off walls at my favorite concert. But I wasn’t sure of the effect for Adderall because I hadn’t done it or seen any one else on it before. Although my friend had never done it before, she assured me that it was just a “focus” drug; It would help me identify my to-do list and tackle it as if time wasn’t a factor. I looked down at the work load before me and knew I had to try it.

A little tip to all those who want to try it: lay out all of your work before you take the pill. You need to clearly define what you want to accomplish or you can get easily distracted. Anyway, around 7pm, I popped my first Adderall. And around 7:30pm, I was tripping pretty successfully.

I was a working machine. I zipped through finance pages as if it were a first grade coloring book. I wrote almost five pages in one hour or less. All of the blank questions I had, I answered in a matter of seconds; even questions I hadn’t yet thought of, I quickly realized I had the answers to those too. It was all working out as if Adderall was the miracle drug until my attentive focus developed a couple of weird symptoms.

It’s better if I write out the following series of events in a timeline:

9:15pm – Twitch transforms into jitters. These are not to be confused with shivers, but my body started jumping uncontrollably. Even as I continued to alternate between both subjects, I couldn’t stay still.

10:00pm – My friend suggests we get coffee to keep our energy up (even though we were still tripping)

10:30pm – My friend calls to check up me. Barely speaking proper English, I rush her off the phone saying that I have to get back to my studies.

10:45pm – The coffee and Adderall combination is surging through my body. I’ve already finished studying six chapters in my finance book. I decide to focus on my final project for the next two hours.

12am – Another four pages down on my final project. My friend starts to freak out. She feels like the Adderall is cutting of her air supply.

12:30am – All work has been stopped. My friend is trying to control her breathing. She now believes her shortage of breath is because she hasn’t eaten.

1:00am – I’ve almost completed my final project. Now I need to proofread the document, so I step into another room, away from my hyperventilating friend.

1:15am – Proofreading on Adderall is like trying to get a two-year-old to make a decision on what they want to wear to school.

1:30am – I’ve been stuck on the same line for fifteen minutes.

1:45am – I take a bathroom break. Squatting took the form of resting my whole body against the bathroom wall while trying not to miss the toilet.

I might have ended my timeline, but the sequence of events on my Adderall trip continue. Originally, I had planned to return to my apartment and take a quick, power nap before my exam, but unfortunately, the medicine wouldn’t let me. I had no desire to lay down. So I decided my next best plan would be to take a shower and head into campus to study some more. Since showering had nothing to do with finance or my final project, my concentration was at an all time low, which led to me having a one-minute shower. I got all my lady parts though – I think. I threw on some sweatpants and jolted to campus.

Luckily my jitters had sufficed and I no longer looked like I was bouncing off the walls. It was still in my system though; I could feel it crawling through my veins. Even as I took my finance exam, I felt the volt of energy resurge my body and ignite all of the knowledge I had crammed into my brain only hours before. During my trip, I felt insane. I felt like I was being taken hostage by my own body and being forced to study; even if I wanted to watch television or fall asleep, there was something inside me that would not let me look away from my to-do list. I knew I was probably tired, but I couldn’t quite feel it. And in that case, it didn’t exist. Adderall was not my typical dose of excitement and adventure; I probably won’t be popping Adderall at my next Beyonce concert. But I did score a 95% on my finance exam. So let’s just say I’m not ruling anything out.